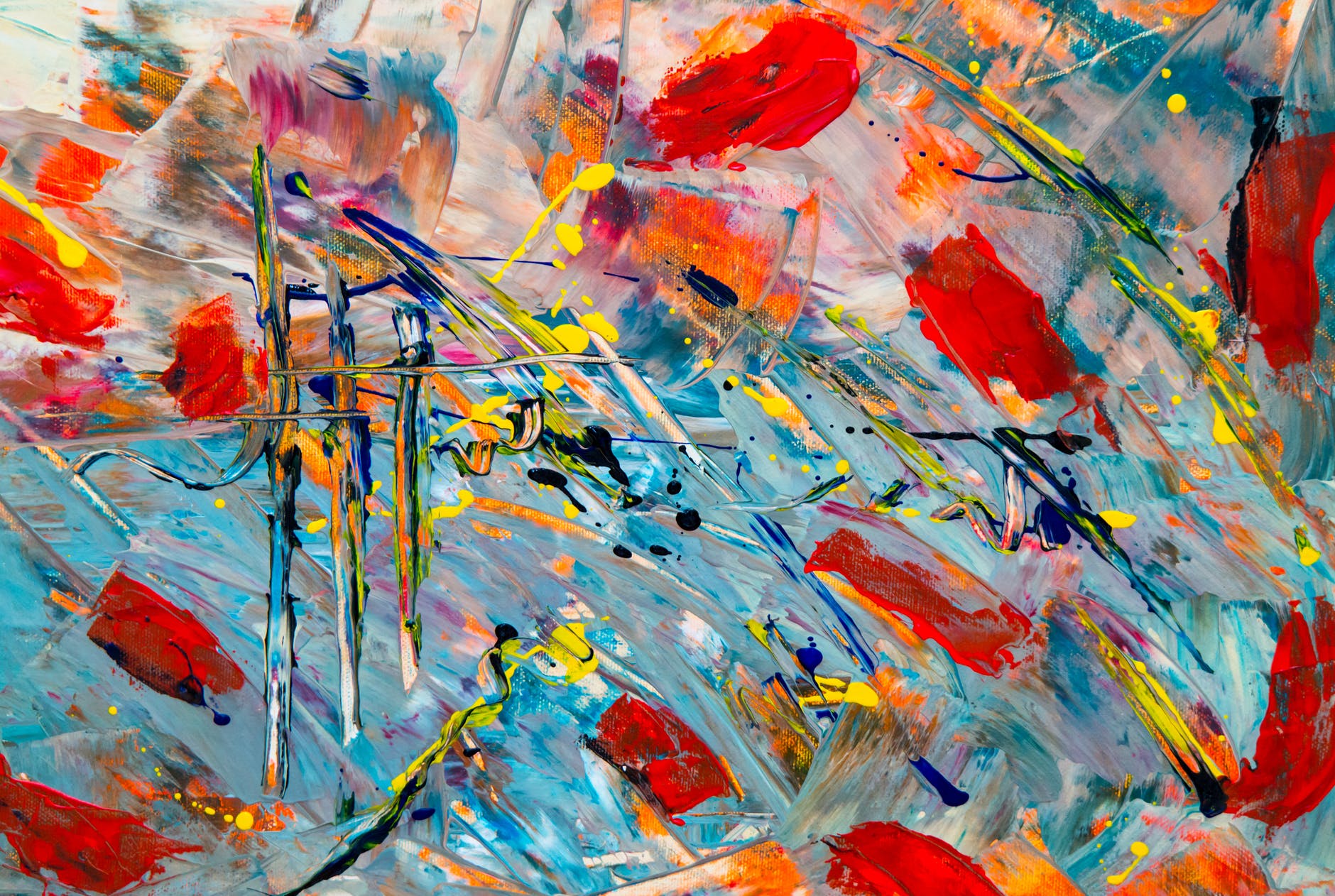 The biographer Andrea Gabor observes him to be

“brilliant and naïve, gentle and aggressive, vulnerable and destructive.” She observes, “Few artists seemed to personify the masculine excesses of the era more completely than Jackson Pollock who came to represent an archetype of unbridled artistic vitality.”

Born in 1912, in a small town in Wyoming, Jackson Pollock embodied the American dream. Pollock left home in search of fame and fortune in New York City. Thanks to the Federal Art Project, he quickly won acclaim, and after the Second World War became the biggest art celebrity in America.
During the many upheavals in his life in New York in the 1950s and 60s, Pollock lost his bearings — success had simply come too fast and too easily. It was during this period that he turned to alcohol and disintegrated his marriage to Lee Krasner.

His life ended, like that of 50’s film icon James Dean, behind the wheel of his Oldsmobile, after a night of drinking.

Although Pollock is known as the extreme advocate of nonfigurative painting through the enormous publicity which grew up around his “drip” paintings of the late 1940’s and early 1950’s, the crisis of figurative as opposed to non-figurative art pursued him throughout his life. Unlike his European contemporaries, art for him was not a matter of deciding upon a style and then exploring its possibilities. He explored the possibilities for discovery in himself as an artist, and in doing so he embraced, absorbed and expanded all the materials which he instinctively reached for, and which we later find to be completely pertinent to the work.

Pollock, from his famous reply in 1944 to a questionnaire published in Arts and Architecture.

“The idea of an isolated American painting,” Pollock said, “seems absurd to me just as the idea of purely American mathematics or physics would seem absurd… The basic problems of contemporary painting are independent of any country.”

The scene is of figures gathered around a table. In the finished painting, only two figures are apparent one at either end of the table, as in Stenographic Figure, Search for a Symbol and Male and Female.

Guardians of the Secret was one of the most talked-about works in Pollock’s first solo show at the Guggenheim in New York in 1943.

Full Fathom Five is full of nostalgia: its dominant color a green that is like a reminiscence of blue and a number of extraneous objects imbedded in the surface, like souvenirs of accident: a cigarette, half its paper torn off to expose the tobacco, two keys, nails, a cluster of tacks, and paint-tube tops making little blind eyes here and there.

Full Fathom Five is one of Pollock’s earliest paintings made using his drip technique.

The title for Full Fathom Five was suggested by Pollock’s neighbour.

It quotes part of The Tempest by William Shakespeare, when Ariel describes a death by shipwreck:

“Full fathom five thy father lies / Of his bones are coral made / Those are pearls that were his eyes.”

Autumn Rhythm is the major Pollock work at the Metropolitan Museum of Art in Manhattan. The New York Times Magazine featured a memorable photograph by Richard Halvar showing a viewer lying on his side several feet away. He is leaning backwards as he looks at Autumn, as if to say ‘this looks magnificent from any angle’.

Spontaneity was a critical element to Pollock’s work, but his free process didn’t mean he lacked control of his medium. He once was quoted saying,

“I can control the flow of paint: there is no accident.”

Pollock’s works of this nature, which appeared from 1947 to 1950 and again in 1952-53, culminating in the heroic Blue Poles, are painfully beautiful celebrations of what will disappear, or has disappeared already, from his world, of what may be destroyed at any moment.

In 1973, the National Gallery of Australia purchased Blue Poles for $1.3 million. Today, however, it has an estimated value of between $20 million and $100 million.

Much has been written about Pollock’s difficulties in the last three years of his life, and more has been spoken. The Deep evokes Pollock’s inner battle. His signature drips are still featured, but they’re muted by layered brushstrokes of white paint.

And it is one of the most provocative images of our time, an abyss of glamor encroached upon by a flood of innocence.

On the night of August 11, 1956, when Pollock was just 44 years old, he lost control of his car due to drunk driving and died. Edith Metzger also died in the car, and a third passenger, Ruth Kligman, was seriously injured.

Like some of the rough-edged characters of Western fiction, Pollock would live out a boisterous and often crude Wild West spirit, especially in the bars of lower Manhattan. Meanwhile his brilliant art would intoxicate sophisticated viewers in the world’s most civilised museums .

In fact, the art world would be influenced forever by Pollock’s unique, important and indelible contribution.

Even during his lifetime, Pollock had become the new benchmark to the art world.

MoMA has a website, www.moma.org, containing links to both often used and rare resources on Pollock.