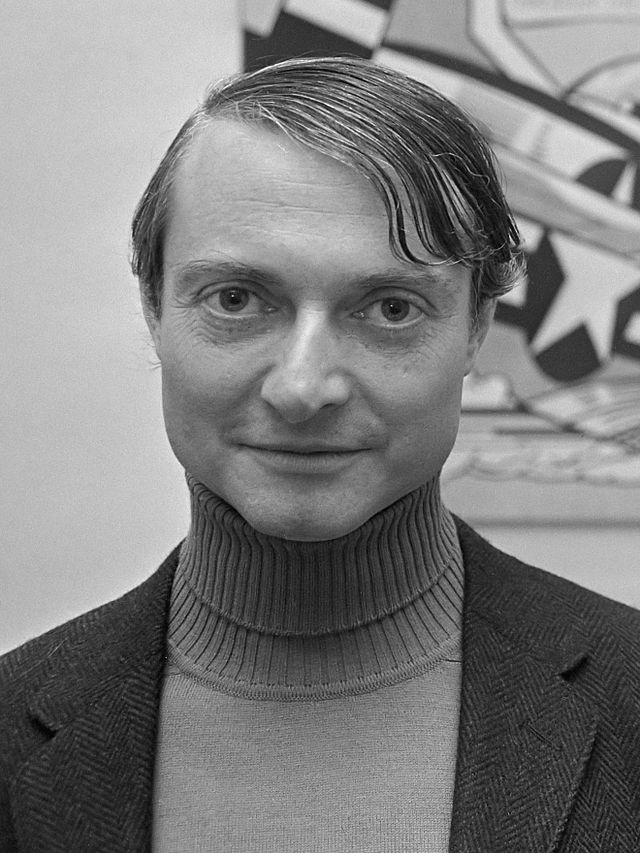 Many of us have a sense of what a masterpiece looks like, and this overblown panel from a throwaway comic strip surely isn’t it.

When this scene was painted in 1962, it must have seemed like a provocative joke. For one thing, the painting’s title is self-consciously perverse.

Where is the subtle brushwork of the Old Masters – the exquisite painterly touch of Titian, Velázquez or Rembrandt?

“Masterpiece” is flat and mechanical, like the comics it is imitating. A speech bubble filled with overemphatic capital letters and exclamation marks.

Aside from someone with a boring name like Brad, what sort of artist would bother to record such banality?

The answer, of course, is the painter: the American artist Roy Lichtenstein (1923–97), who is known as the architect of Pop art.

In the Sixties, Lichtenstein became famous for painting cartoons. People did not exactly appreciated this kind of art. But Lichtenstein’s witticism was also spiked with ambition and prophetic irony.

Within a few years, New York did start clamouring for his work, and the painting’s fantasy of wish fulfilment coalesced into reality. Masterpiece became a masterpiece of contemporary art.

Lichtenstein, was a native of New York who lived and taught in New Jersey, had brief experience with industrial design and display work while living in Ohio. However, his later works used the color, stencils, and Ben-Day dots of the comic strips as basic elements in his style.

He is sometimes forced to vary the color he uses for the dots to make them seem the same “mass-produced” color as his solid areas; his paintings force us to find something important, amusing or inflated in a cliché, in an ordinary event or in tabloid heroism.

If Lichtenstein is the architect of Pop art, then Look Mickey, an oil painting measuring 48 by 69 inches, is the movement’s foundation stone. Donald Duck and Mickey Mouse are fishing on a jetty.

Where did this new style come from?

Over the years, conflicting accounts have been given about the origins of Look Mickey. One of the stories involve Lichtenstein’s sons.

According to Ivan Karp, who was one of the first people to see the canvas while working at the Leo Castelli Gallery in New York, Lichtenstein said:

I did some paintings for my kids . . They asked me if I could paint a cartoon if I had to. And I said I probably could. So I did this giant, oversize cartoon. And they were very impressed by it.

To make his painting, Lichtenstein dispensed with all of the text and focused instead on the image of the girl, whom he cropped and subtly transformed.

One of the most striking aspects of Girl with Ball is the mesh of fine red dots that stipple her flesh.

These dots, which first appeared in Look Mickey, quickly became one of Lichtenstein’s signature motifs. They mimic a common commercial printing technique known as the ‘Ben-Day dot’.

The turbulent waters of Drowning Girl, has it’s art-historical reference in the famous Great Wave woodblock print by the nineteenth-century Japanese artist Hokusai.

Lichtenstein painting was a calculated, disciplined affair. In 1962 he started to use turpentine-soluble Magna acrylic paints, as well as oils.

This afforded him greater flexibility to edit as he went along, since he could wipe away unwanted Magna using turpentine without harming the layers underneath.

‘I want my painting to look as if it has been programmed,’ Lichtenstein said. ‘I want to hide the record of my hand.

Lichtenstein’s early Pop work is as an assault on abstract art, which had dominated the Fifties.

Take one of the first pictures that he painted after Look Mickey: Popeye (1961), in which the Herculean sailor-man, pumped up with spinach, wields his dumb-bell forearms to knock out the bearded villain Bluto.

The painting dramatises an inter-generational struggle in which victorious Pop art, represented by the appropriately named Popeye, smacks Abstract Expressionism to the floor.

Lichtenstein applied paint in a highly controlled manner – unlike his immediate predecessors in American art, the Abstract Expressionists, who included Jackson Pollock and Willem de Kooning.

‘Whatever quality one generation has is boring to the next generation,’ Lichtenstein said in 1965. ‘And so you look for something else.

As a result, his pictures often feel ironic. By mimicking the appearance of that culture, Lichtenstein exposed its shallow psychology and sexist rhetoric. He was inviting us to laugh.