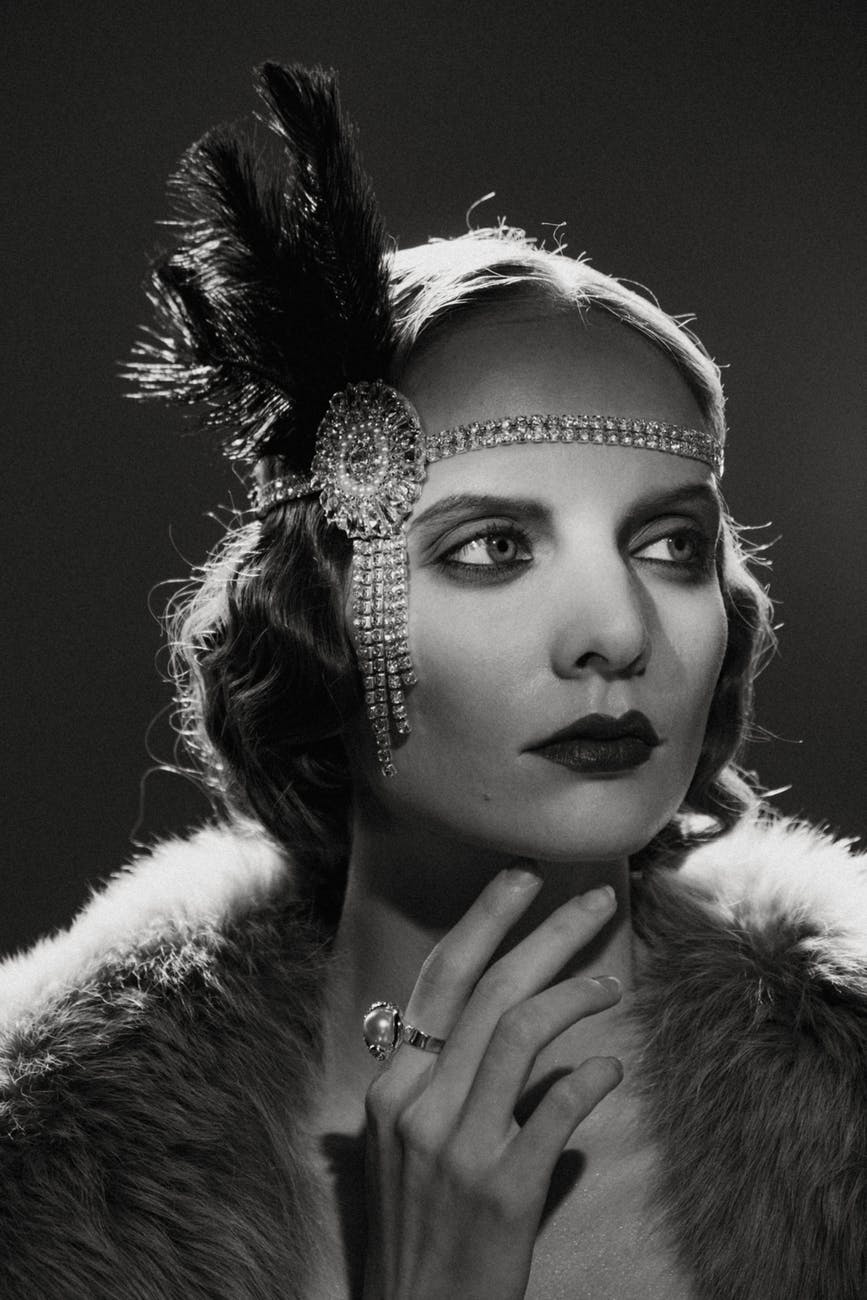 The enigma that Tamara de Lempicka exudes is unforgettable. In my previous article we get a glimpse of how De Lempicka’s decision to become an artist was an arbitrary and rather mercenary matter. She claimed that she did so at the suggestion of her young sister because of the deteriorating state of her marriage and her lack of money.

De Lempicka studies briefly with the distinguished former member of the “ Nabis ” group Maurice Denis, and then with the much younger and more modern André Lhote.

Both of her teachers would have inculcated her with a respect for Ingres and for Cezanne and Lhote would certainly have introduced her to a decorative version of cubism. Neither the smooth linearity of Ingres, nor the angularity and fragmented space of cubism that would later characterise her best work are as yet apparent in this portrait.

Portrait Of a Polo Player 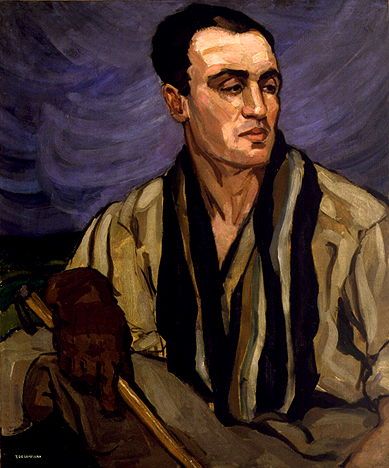 The young polo-player inhabits the elegant and privileged world to which de Lempicka aspired and to which she would soon belong, thanks to her skills as a portraitist.

At the time De Lempicka met Gide at the literary Salon of Nathalie Barney, he was already in his mid-fifties and regarded as a grand old man of French Literature, and would publish his autobiography “Si le grain ne meurt” the following year (although it would not be for another two decades that he would receive the Nobel prize for literature). De Lempicka does Gide the honour, as she would later her second husband Baron Kuffner, of concentrating entirely on his face with no distracting accessories or décor. With its heavy lidded and blank eyes the face forms a mask. 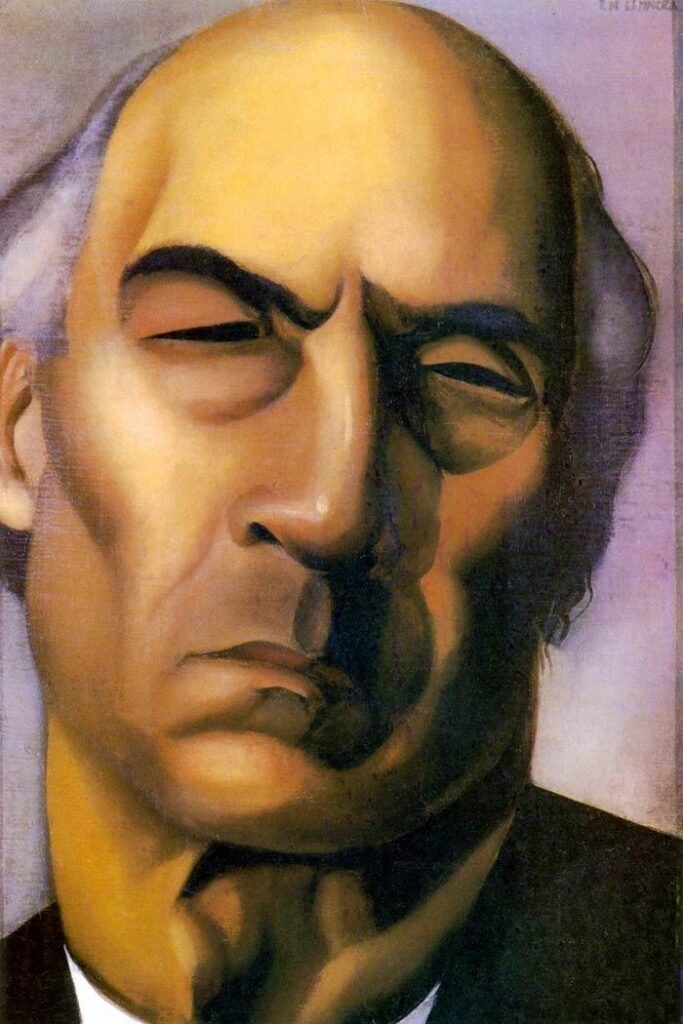 The type of pretty, slender waisted young man with slicked back hair represented in French movies by Henri Garat who was publicised as “Le Prince Charmant” and became immensely popular for a while in the early 1930s. Despite his aristocratic title, the Marquis d’Afflito would seem to belong to the category of the narcissistic and feminised young man in the first of the two portraits that De Lempicka painted of him. The reclining pose, so unusual in male portraits adds to the impression of sexual ambiguity . 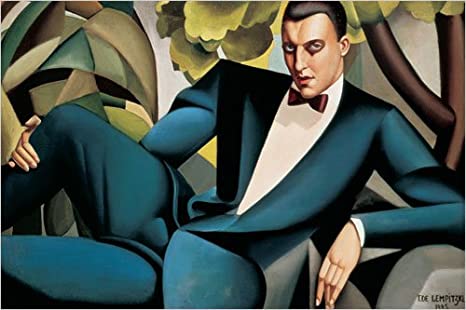 The portrait of the Duchess de La Salle is one of the grandest that De Lempicka ever painted. The full length format and the traditional props of the curtain and the classical column invite comparisons with courtly and aristocratic portraits of the sixteenth and seventeenth centuries, though the “cubified”, nocturnal cityscape illuminated by electric lights in the background, the bobbed hair style of the Duchess and her daringly masculine garb update the picture unmistakably to the twentieth century. With her robust build and her somewhat menacing expression and pose, the Duchess exemplifies the “Amazone” or “butch” lesbian. The conspicuous placing of this provocative picture behind De Lempicka’s bed in a publicity photograph of her bedroom was clearly intended to flaunt the artist’s own bisexuality and sexual freedom. 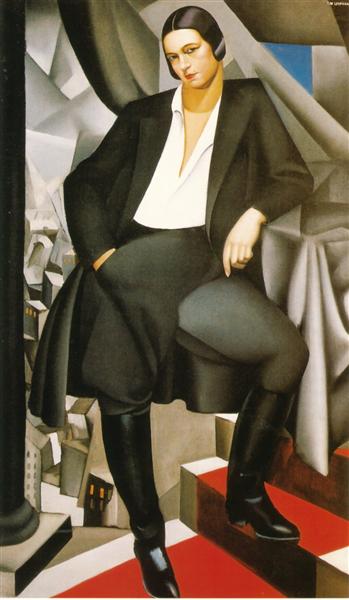 Though she was a mother of a young child during the years of her greatest creativity, Tamara de Lempicka’s depiction of children are oddly lacking in any trace of the maternal tenderness that we find in those of other women painters such as Berthe Morisot and Kathe Kollwitz. Even her 1928 painting of a young mother breastfeeding her child is oddly unconvincing. She looks more concerned to display her elegantly tapering fingers than with holding her child. The domesticity celebrated by an artist like Mary Cassatt (who ironically never married or raised children) was totally alien to De Lempicka.

The two little girls with ribbons are vamps in the making. Their body language and facial expressions exhibit signs of preternatural sexual awareness. By using a low viewpoint and filling the entire canvas with their figures, she makes them loom large like young giantesses. They seem powerful rather than as vulnerable as one expect with children of their age. 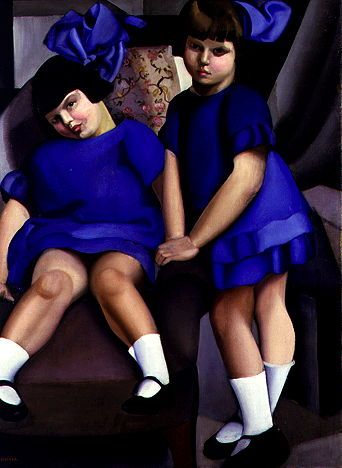 The commission to paint the bride of the wealthy young American Rufus Bush not only provided De Lempicka with four times her usual fee but also with her first opportunity to cross the Atlantic. As for so many Europeans in the first half of the twentieth century, the energy of New York and the sight of its spectacular skyline proved a revelation to the artist. While she was the pampered guest of the Bush family, De Lempicka was briefly able to witness New York in all its jazz age , prohibitionary glory. The stock market crash that put an end to a decade of partying happened while De Lempicka was there. Had the supply of wealthy New Yorkers wanting to have their portraits expensively painted not dried up so quickly, it is easy to imagine that Tamara’s career might have taken a different turn. As it was, she returned to Paris in a few months. But the iconography of the Manhattan cityscape became an ubiquitous part of her repertoire for the next few years.

The rapid disintegration of the relationship of the newlyweds meant that this portrait of the fashionably boyish Mrs Bush was put away and disappeared from view for over half a century. 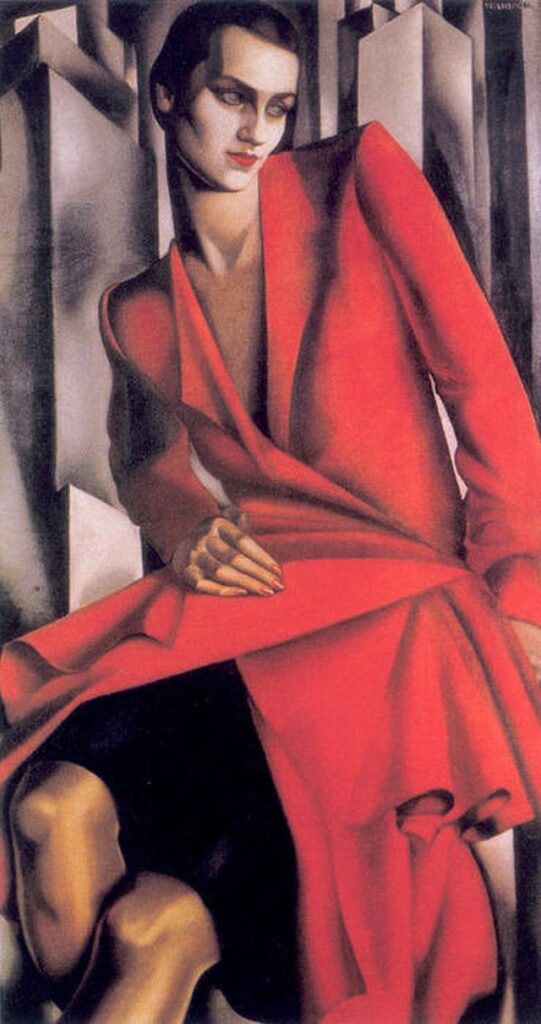 Combining a formidable classical technique with elements borrowed from Cubism, de Lempicka’s art represented the ultimate in fashionable modernity , while looking back for inspiration to master portraitists such as Ingres and Bronzino. The sleek and streamlined beauty of her best work in the 1920s and 1930s, and traces the extraordinary life story of this talented and glamorous woman. From her early years in turn-of-the-century Poland and Tsarist Russia, we explore her glory years in Paris through to her long years of decline and neglect in America, and her triumphant re-discovery in the 1970s when her portraits gained iconic status and world-wide popularity.